On 17 and 18 October 2020, the DMFV, MAMD, Idokan Europa and the Jiu-Jitsu and Karate Schule Penzberg e.V. invited participants to a two-day course on "Knives" and "Modern Arnis" led by Instructor Torsten Kosuch (1st German Knife Association). Grandmaster Roland Herlt, who was originally scheduled to teach Modern Arnis, was unfortunately unable to attend due to a suspected corona in one of his students. The course, which was attended by around twenty participants from Penzberg, Leipzig and Bahlingen near Freiburg, took place in the sports hall in Penzberg under corona conditions. The teaching units were shortened to one hour each, followed by a ten-minute break. Partner exercises were dispensed with. The organisers also paid very close attention to spacing and regular airing.

After welcoming the participants, the first knife unit started on Saturday. Here, knife forms, i.e. a certain sequence of movements with the knife, were practised in both knife and dagger stances. In order to get a feeling for the movement of the blade, the so-called "knife forms" were also practised on the wall. Of course, this was done without damaging the wall, i.e. the pictures were not carved into the wall, but it was still easier to visualise them this way. Instructor Torsten Kosuch paid close attention to every detail of each individual's handling of the knife. A minimal change in the hand position makes a decisive difference in the cutting process when handling the knife; this had to be understood and practised.

In the second unit, Instructor Ralf Notter and Instructor Torsten Zumpf taught Modern Arnis (as substitutes for GM Roland Herlt). The participants were divided according to their graduation in Modern Arnis.

Torsten Zumpf showed the first double stick anyo, a form of exercise in which two sticks are used to fight an imaginary opponent. The aim here was to remember the order of the fighting techniques and to improve the technique in execution. Another topic was twirling with two sticks according to GM Presas Junior.

Ralf Notter taught Espada y Daga, which is the art of fighting using sword and dagger or stick and dagger at the same time. Here, too, previously defined sequences were practised. Familiar sequences were repeated, but new ones were also learned.

In the third unit, instructor Torsten Kosuch continued with the knife forms. After repeating the forms already learned, these were expanded and also practised with hand support and hand changes. This presented the participants with new challenges, as the view that one had now internalised the form had to be thrown overboard again very quickly.

On Sunday, instructor Torsten Kosuch showed the 1st knife form in running in the first unit.

The second unit was again taught by instructors Ralf Notter and Torsten Zumpf. Instructor Torsten Zumpf also showed the first double stick anyo to the group that had practised Espada y Daga the previous day. Here, too, the aim was to learn the sequences and to improve the technique of sequences already learned.

Instructor Torsten Kosuch had the participants repeat all the forms they had learnt in the third and final session, answering questions about the correct sequence and the exact handling of the knife.

Finally, Shihan Rudolf Gabert, 1st Chairman and Headmaster of the Karate School Penzberg, and Instructor Torsten Kosuch thanked the participants for their discipline during the entire course. This made a Corona-compliant training possible, during which a lot was learned despite the currently difficult circumstances and many suggestions were taken away for further training.

A special honour was bestowed on Shihan Rudolf Gabert. Josef Holzmann, President of Idokan Europe, presented him with an honorary black belt with embroidery from the association for his many years of intensive work in Ido. It should also be mentioned that during the knife course Instructor Torsten Kosuch examined Shihan Rudi Gabert, Renshi Karlheinz Hauswurz and Sempai Max Schröger for the next level.

In conclusion, it can be said that Corona-compliant training also offers many opportunities to learn new things and to deepen what has already been learned. In the end, everyone went home with many new ideas and insights.

Pictures from the course in our gallery 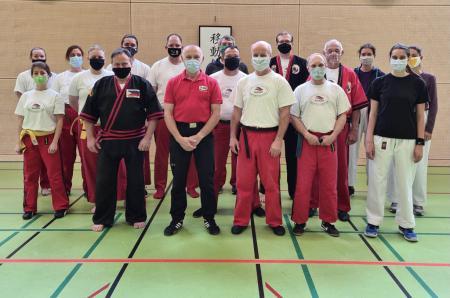