In connection to the Annual General Meeting 2014, the year-end training with Arnis and knife enthusiasts from Braunschweig, Leipzig and Herbolzheim took place in Königslutter on 9 November this year. 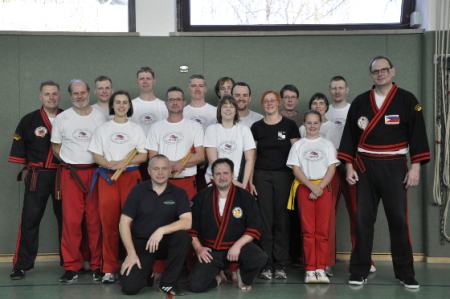 After the meeting of the MAMD and DMFV the evening before, everyone was fit again punctually at 10 a.m., fit enough to use the new Italian/Philippine warm-up method. These consisted of different running variations, push-ups and buck jumps, which Torsten Zumpf from the IPMAF camp in Milan brought along with Grandmaster Ernesto Presas Jr. (see report). Fortunately, only a fraction of the actual scope of these exercises was performed. Some participants who were familiar with these exercises or who were told about them feared a circulatory collapse.

The first unit with the round wood as knife replacement, treated block techniques against stings as well as deflectors and counter-attacks. Torsten Kosuch also taught us a sequence of these techniques, which also included bringing the opponent or at that moment the training partner to the ground with a targeted kick to the knee. Finally, we practiced the sectional views 1 and 2 in knife and dagger form, each student according to his ability and level of knowledge.

After a short break with coffee and very tasty cake, the training continued with a Modern Arnis unit with Torsten Zumpf.
This stock of "light" stick exercises. A combination of footwork and whirling techniques - similar to an Anyo - which was also taken from Milan. This exercise challenged all of us, but was all the more fun if it succeeded and the combination succeeded in the way shown.

The third session followed under the direction of Ralf Notter.
He taught us 4 different variations of the Hirada. This technique is based on the handling of the machete, whereby one stands low to be mobile. For those who did not know this technique and had never trained before, it was clear that they would have sore muscles the next day. But everyone gladly accepted that, because this technique was a lot of fun, as well as the whole training.

Time flew by and all participants drove home in a good mood and with more knowledge. Everyone had spent a beautiful and instructive Sunday.

Thank you for having such great coaches who make all the training sessions possible for us and for the helpers who provide coffee, cake and sausages for our well-being.