On Wednesday, May 9th, it was finally time to return to Leipzig, because the Ascension Camp 2018 of the MAMD and DMFV began. At 1:15 p.m. the journey started, as in the years before already with bright sunshine, this time from Salzgitter-Lebenstedt in the direction of Grillensee. Unfortunately, we reached with delay it due to several construction sites. A part of the already arrived people completed the first free training session, while for us it meant to dedicate ourselves first to the construction of the beds. As promised by Torsten Zumpf, we went to "our" usual Stube 306 (as the insiders know, everything started in 2012 with Stube 406). Afterwards we had a toast to a nice camp time. Already on the way to the first common dinner, the cordial greeting of all up to then arrived participants took place step by step. It was nice to have our four sports friends from Austria with us again. In the evening the camp was officially opened in the common room of house 3, by GM Wolfgang Schnur (10th Dan). Together they let the first evening end with good conversations after a long time of reunion. Afterwards we went for one or the other still on Stube 306 further, until also there the light went out.

On Thursday morning the first official greeting took place. GM Roland Herlt (8th Dan) divided the Arnisadores into three groups. Black belts, advanced students and beginners. The two highest graduated students, Alex and Manuel, were also supposed to train in the group of black belts. This constellation was maintained throughout the entire camp.
The program consisted of Iaido, Modern Arnis and Mano Mano. In the afternoon GM Wolfgang Schnur asked all women to sit at a table with him for a champagne drink, because not only the men should have "their day".
At 4 p.m. on the dot we were greeted and the official training part was finished because it was "Men's Day" (the official holiday in Germany is called "Christi Himmelfahrt" or "Ascencion of Christ", however, at some point unmarried men started taking it over and use it as an excuse to go out with male friends and drink). Who wanted, could however voluntarily further train up to the evening meal.
At 7 p.m. everyone had to come to the common room. The two Franks had previously been given a task by GM Wolfgang Schnur. Each participant was to be given an engraved medical glass, as well as a torch and a ballpoint pen. When he did so, GM Wolfgang Schnur gave the next surprise: to everyone's delight, Harry Sagan received the 6th Dan in Iaido. Tosten Kosuch was awarded the 4th master degree knife. Then the name Torsten Zumpf was called, who was asked several times to come forward. First he got the Lakan Apat (4th Dan) in the Kombatan, as soon as he sat again, he was appointed as an instructor and after he sat again, last but not least the handing over of the corresponding stamps followed. Now the time had come to fill the medical glasses with medicine from the Franks and to toast them together before the wave of congratulations rolled on the newly graduates. Harry Sagan and Torsten Zumpf promptly sponsored the barley juice for this and the next evening. Seamlessly it went on in comfortable round still many hours. Around 11 p.m. the residents of Stube 306 slowly withdrew to their room and wanted to end the evening together. After all, it was Frank's birthday the following day. He assumed that only his room would congratulate him at midnight. But as one says so beautifully, it usually comes differently than one thinks. At midnight on the dot the door of the parlour opened and a crowd of almost 25 people, led by GM Wolfgang, entered the parlour one after the other and a serenade with the following flood of congratulations started. It was still several times pushed, before in Stube 306 at earlier hour finally the light went out.

Luckily on Friday morning the training started one hour later, with a unit Iaido. Aftereffects of the medical pleasure of the previous evening were not only visible with the "child of the day", but that one or the other roar was afforded, to the horror of Harry Sagan.
After lunch the planned excursion followed. We drove by car to the Naunhof train station, from where we took the regional train to Leipzig main station. Arriving there, the group expected a 90-minute city tour in a historic tram. Before it was time to return to the Grillensee in the same way, the group grew further. Rudi and Karlheinz from Penzberg, who had only registered for today due to their recent participation in a federal training course, had meanwhile arrived and were warmly welcomed. Back at the holiday resort, GM Wolfgang with his "sales stand" offered everyone the opportunity to expand their personal equipment with numerous advertised articles. Before they got together in large groups to spend the evening together again, many took advantage of the offer of another voluntary training session after dinner. Some of the busy trainees were exam candidates who were announced for Saturday and who wanted to prepare themselves additionally. After a repeatedly sociable evening it went on for one or the other still on Stube 306.

Saturday morning was the hardest camp day on the program. After the greeting we were divided again into groups. The candidates went through their examination program under the supervision of Torsten Zumpf. Because Torsten Zumpf had a task to fulfil. In his function as instructor, he was supposed to take his first exams in the afternoon. The other groups trained Bo, Mano Mano and Messer at the respective stations, which again required concentration and attention. This was followed by the lunch break. Afterwards, GM Roland Herlt said hello to him for the afternoon section, but he brought very sad news. Our long-time trainer and sport companion, Thomas Schwaner, had fallen asleep at the age of only 53 years after a long illness the day before. We were deeply shocked! A minute of silence followed for Thomas. Then it went on with the training. The candidates then held their exam with Torsten Zumpf, while the other groups continued training. Our training ended with us lining up and GM Roland Herlt handing over the camp participation certificates. Then Torsten Zumpf issued the MAMD examination certificates. Afterwards Torsten Kosuch did the same for the DMFV. All had passed their exams and they joined the queue of congratulators.
In the evening, as in the years before, again by our grill masters Sven and Renate tasty grilled and one sat still many hours comfortably together. The barley juice was sponsored that evening by Torsten Kosuch and the "child of the day" of the previous day. To the astonishment of many, many tried their hand at producing "giant soap bubbles", which the long Frank had received as a gift from the normal-grown Frank in laborious fiddling work on his special day. Another group then gathered around a fire basket at a later hour to warm up a little.

Since it was the last evening together, a shortened night's rest was called up again at Stube 306. All in all, one could say in conclusion: Stube 306 has returned to its reputation!

On Sunday morning we had to remove the beds and vacate the rooms. Luckily we could deposit all things, as already in the camps before, again in the common room.
The last training day was completed in three units for the Dan carriers. Chain lead by GM Roland Herlt, followed with Iaido lead by Harry Sagan and finally pressure points also by Harry Sagan. Afterwards we went for a large part to the last common lunch. At the latest there we said goodbye to each other. Then the journey home was started.

A big thank you to Torsten Zumpf for the successful organisation of the camp. Thanks also to Grandmaster Wolfgang Schnur and Grandmaster Roland Herlt, Master Maic Andrée, as well as the instructors Ralf Notter, Torsten Zumpf, Torsten Kosuch and Harry Sagan, who taught us a lot with their knowledge. With the conclusion that everyone has taken something from the camp for themselves. We are already looking forward to the next reunion at the Grillensee for the Ascension Camp 2020.

You can find more pictures of the camp in our gallery. 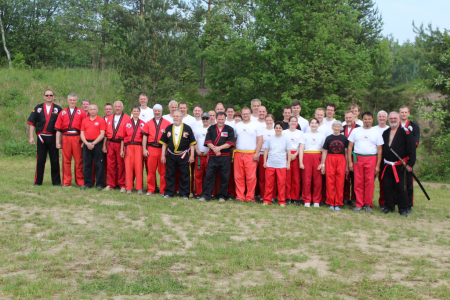 Back to Reports
Year
2018
Author of the text
Frank Stallmann, Giovanni Fucito