On Wednesday 28 May the Ascension Camp 2014 of the MAMD and DMFV began. Guests from Germany and Austria were expected. The latter were also the first to arrive, as their plane arrived at Leipzig Airport shortly after noon. A pick-up directly from the airport was organized by Torsten K. and so they could enjoy the rest of the way to Camp Grillensee in the bus of the Polizeisportverein Leipzig e.V. in a very relaxed way.
Shortly after the Austrians, the participants from Leipzig and the first guests from Penzberg - Sven, Jonas and Max - arrived. After a warm welcome the rooms were occupied. The organizing Leipzig Dojo had come up with a little surprise. In the rooms there was a small sweet for each participant.

With the exploration of the surroundings and a first small training unit with Guro Torsten Z. the time until the arrival of further guests, this time from Braunschweig and Königslutter, was used. Due to traffic jams the Braunschweigers and Königslutterans had a longer journey than usual. So it went for them after the greeting directly to the dinner. Afterwards the rooms and beds were made. Thanks to Torsten Z. we (the team from Stube 406 from Pentecost Camp 2012, see report) had Stube 306 this time. Was that a good or bad omen?

The majority of the guests accepted the offer of the first voluntary training session in the evening under the direction of Guro Bruno Hendris. Double-stick techniques were trained. Since it was raining cats and dogs, everyone gathered under the pavilion! - All except Room 306, who were absent for "medical" reasons. 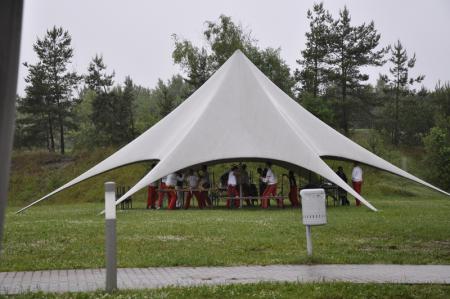 At the end of the evening we were happy about the reunion and the great participation of the sports comrades from Austria: We already knew Erika and Martin from the autumn camp 2013 (see report) and that they had liked it very much, we quickly noticed the "increase": Birgit, Doris, Manuel and Joana.

On Thursday morning we had rain, rain and rain. Just in time for breakfast Master Roland, Renate and Claudia as well as Instructor Maic with daughter arrived.
Due to the weather conditions the training was only possible in the neighbouring shooting range - with light powder smoke. After the warm-up the curious were divided into two groups: kinve techniques led by Torsten K. and Modern Arnis under the direction of Master Roland on the subject of disarmament.
The voluntary training began at 4 pm. The students had the possibility to practice the first Kata with the Hanbo or with the Bo. At this training already clearly fewer pupils were present, so 50% of the Room 306 were missing, because it was "men's day".
Since meanwhile nearly all had arrived, the official greeting by Grandmaster Wolfgang Schnur took place at exactly 7 p.m.. From supplements in the behavior of the Dojo etiquette, it went to the announcement of the 20-year-old existence of the MAMD and it got all a personal glass with engraving of this year's Camps presented. This was also used immediately. In addition, it was announced that the planned surprise would be brought forward from Saturday to Friday. This increased our excitement about what would follow. From Grandmaster Wolfgang Schnur we learned nothing. We had to be patient and occupied ourselves with other things. So this evening the bathroom of the Room 306 was at a little later hour without further ado misappropriated by Claudia as "hairdresser's salon". The result was impressive.

Due to yesterday's "men's day", the training began on Friday one hour later. Fortunately it was sunny this time and we could train at least in the outdoor area of the shooting range. The lawn was still too damp.
Also today we students were divided again into a Messer and Arnis group. In Arnis we specialized in Mano Mano techniques. In the knife group a large part prepared for the upcoming exam on Saturday. The time flew by again: felt shortly after the start of the training it was already over again.
After lunch we took the bus to the Stasi museum "Runde Ecke" in Leipzig at 1 p.m. on the dot. There everyone expected a very interesting guided tour. Afterwards Torsten Z. distributed excerpts from the city map with marked departure place and small groups formed, which used the remaining spare time in most different way.
Back at the Grillensee there was a warm reunion with the meanwhile arrived Rudi and Karl-Heinz from Penzberg.
Before the announced surprise by GM Wolfgang Schnur took place punctually at 7 p.m. o'clock, everyone gathered excitedly in the group room for what was to follow now.
Torsten Zumpf received the MAMD trainer license and a personal dedication from Grand Master Wolfgang Schnur. Torsten Kosuch received the 2nd master's degree and the examiner's license in the DMFV. Bruno Hendris received the 3rd Dan in Mano Mano and Maic Andrèe the 5th Dan Kombatan. Visibly moved, all of them received their awards from Grand Master Wolfgang Schnur.
Now it came to the climax, master Roland Herlt was honoured with the 7th Dan Modern Arnis/Kombatan.

From now on all drinks were free every evening, which was immediately implemented. On the occasion of the 20th anniversary of the MAMD, the Dojo Leipzig presented a bottle of "medicine" to Grand Master Wolfgang Schnur. On a special label was written - in German, Baybayin and Tagalog (writing and language on the Philippines): 20 years MAMD - thank you for everything 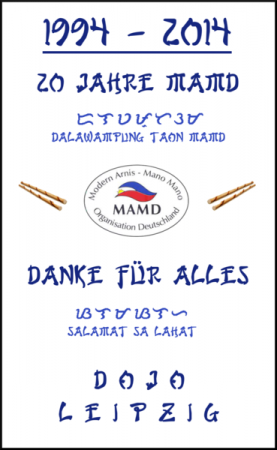 On Saturday also the sport comrades from Wernigerode arrived on time for breakfast. Of course we, the participants from Room 306, didn't feel so good on this sunny morning. Yesterday we had too much "medicine" and too little sleep and therefore needed a little longer to get going.
Just today we had to do the hammer program of the whole camp, training until 5:30p.m.!!!!! Not only that, in the first training session the upcoming exams were taken, in the knife as well as in the Modern Arnis. While others cooled down during the lunch break in the Grillensee, Room 306 lay completely in their bunks.
In the afternoon the "NEW" MAMD trainer Torsten Z. pleased us with a funny but also exhausting warm-up level "JUMP AND RUN". A kind of Super Mario Bros. in real time. The advanced students then trained with master Roland Espada y Daga and all others with Maic blocking techniques.
During the break we enjoyed a delicious piece of cake and a cup of coffee before returning to the groups. Half an hour before the end of the session GM Wolfgang Schnur first called all the women together and showed them tips about women's SV. Then the men followed, where the GM showed us an effective block technique with the complete forearm and an effective counter.
At the end of the hammer program, the announcement of the passed Modern Arnis exams followed with the next surprise. Master Roland Herlt called Torsten Zumpf to the front and explained that together with instructor Maic Andrèe, in coordination with GM Wolfgang Schnur, he handed over the 2nd Dan in the Modern Arnis. Now also for Torsten Z. the special "training unit" with master Roland and Instructor Maic explained itself apart from the others.
In the evening we had a barbecue and celebrated together. Grill master Sven from Penzberg took over the rule at the fire and provided for content and full participants. He was actively supported by the grill master Renate as his assistant.

On Sunday it came unfortunately already to the last training unit. Here several groups were formed. Messer, Modern Arnis and Iaido. But the air was out and the sun contributed the rest, so that we were a bit happy when it was the last time "line up". Now followed the announcement of the passed knife tests.
After the last common lunch the big farewell took place and everyone was looking forward to the next common reunion.

A very big thank you to the organizer Torsten Zumpf, who made a beautiful and unforgettable camp possible for all of us!
Thanks also to all the coaches who helped us a lot!