Grand and Senior Master of the Modern Arnis Department of TSG Königslutter were present as referees at the 14th Bundeslehrgang Verband asiatischer Kampfkünste e.V. (Federal Training Course Association of Asian Martial Arts). Idokan Europa e.V. 2015 and for the 40th anniversary of Dojo Penzberg.

With these words Rudi Garbert (Hanschi, Kudan; Jiu-Jitsu from Penzberg) began the opening speech and asked those present to be like a sponge ready to absorb new water (the knowledge of the grandmasters).
More than 20 teachers with a total of more than three hundred years of martial arts experience as dancers from different countries (Germany, France, Italy, Israel, Slovakia, Switzerland, southern Spain and even Australia) were invited and arrived at this event. 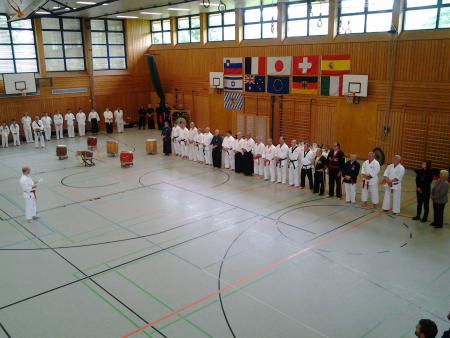 The photo shows the high-ranking teachers at the opening ceremony. The performance of the Taiko Drummer Team was an additional musical enrichment, which Martin Mittenmeier surprisingly brought with him.
For reasons of space not all names are mentioned here, but the picture and the naming of the represented martial arts may give a little insight into the variety of the event. Speakers for the martial arts Jiu-Jitsu, Ido Ryu, Karate Do Iaido, Kombatan Modern Arnis, Teakwondo, Aikido Aikijitsu, Judo, Krav Maga, Hambo-Jitsu, Kobudo (Bo), Aikijo were present. With extraordinary commitment and outstanding competence in their budo arts, the top-class reverents taught the 250 participants, at least one third of them also black belts!

The peaceful and friendly atmosphere was characterized by the interest in other martial arts and the representation of one's own sport in the individual teaching units. Grand Master Wolfgang Schnur and Senior Master Roland Herlt of TSG Königslutter represented the Moderm Arnis Mano Mano in four different lessons. Several Modern Arnis students accompanied them.
In many conversations friendships were made and strengthened and experiences were exchanged. This happened not only on the two training days but throughout the entire programme, which was all about the sporting event. Thus a majority of the advisers and some pupils went already on Friday on a common investigation route of the earlier alpsarea to the lock Linderhof and monastery Ettal, which was led by Klaus Peter from Penzberg.
The Saturday evening ended with a common dinner, at which the respect, the respect and the recognition among each other became obvious by the most different honors and honors.
Time passed far too fast, so that we had to start our way home on Sunday after long farewell ceremonies.

Conclusion: a successful, highly interesting and versatile course that will remain in our memory for a long time!