On Saturday June 11 2011, 15 MAMD members met in the Dojo - Braunschweig Rautheim for the Pentecost camp. Loaded with salads, various delicacies for grilling, sleeping and sports things the members appeared with a lot of good mood and anticipation.
After the vehicles had left the yard and everybody had changed, the first training session with the Philippine long pole (BANKAW) began outside. In the middle of the most beautiful training it began to rain, so that we had to flee fast into the hall. With regard to the inventory of the dojo, only the short long pole techniques were practiced. New for us was the defense with double stick against the long stick and Sinawali with long stick and stick. Luckily Petrus had an understanding and we could go outside again. In the meantime also the "big" Frank had arrived, who was very happy to be able to practice a little with the long pole.
After a longer break where we could eat apples, pretzels and herb butter we started the next training session with the knife. After the instruction of the correct knife posture, connected with the inner attitude towards the knife - even if we "only" practice with a dummy - everyone fell silent, because we became aware of the seriousness of the matter in dealing with the sharp knife. Among other things, we practiced changing the knife hand, handing it over, simple attacking and defensive techniques (stick against knife and knife against knife).
After a short drinking break the last training part began: Anjos. For the green belts, Anjo Apat was part of the program, which was easy to understand from the sequence, but has its pitfalls in detail. The freshly baked green and black belts were allowed to practice the corresponding Anjos alternately with the white and yellow belts. "Acquiring knowledge is an important part of Modern Arnis. In order to consolidate one's own knowledge, the passing on of knowledge is just as important," Roland emphasized.
After this last part, everyone was looking forward to the communal barbecue. Since everyone was helping, the tables were quickly set up and filled with a wide variety of culinary delicacies. While everyone was waiting for the charcoals to finally get hot enough, Tessa's watermelon was distorted. Renate and Caro took turns at the grill. The joy was great when Grand Master Wolfgang Schnur and his wife Luise joined them. Everyone gave funny anecdotes from their lives and we had a lot to laugh about. Later in the evening Wolfgang demonstrated his notorious magic tricks.
Around twelve the last ones hid in their sleeping bags. Andy got special attention because of his comfortable luxury air mattress pour deux. A polyphonic snoring concert could be heard, with the famous soloist "little" Frank at the top.
On Sunday the 12th Wilfried mercilessly threw everyone out of their sleeping bags and after a long table was set again, we had an extensive breakfast. We could hardly wait for the training and so everyone was ready 15 minutes before the first session of the day by Roland. From Leipzig Torsten came in addition, who was greeted warmly by all. To our joy Roland repeated the long pole unit of the day before and supplemented it also still with new techniques. The sun burned down on us again, so that fast an indirect fight for the best shadow places developed. The group could be divided into "shadow people" and "sun hungry people". After the first short break Roland began to show us different stick techniques. So we practiced the middle hand position with block, disarmament and counter techniques.
After a short break turning techniques with the stick stood in the center, which impress by their speed. Unfortunately for many the "air was out" and the effort of the two days was noticeable. The sun shone relentlessly down on us and we all had our "midday low". Roland finally had mercy on us and there was another longer break with coffee, bread and sweets.
FInally we went into the last round with the focus on Dulo Dulo, strengthened and a bit rested. Block-, counter- and fixation techniques with nerve points were on the agenda - nice and painful, if you can. The little Dulo Dulo is quite respectable! Way too quickly everything was over. After changing clothes, tidying up and packing up, we all sat in the shade for a short time, exhausted but very content, and let the course end.
Now we talked about the next training courses and especially about training times during the summer holidays. For this purpose Wilfried again makes his Dojo available, so that everyone who wants to can attend during the usual training times. Roland would even agree to offer an additional training course on a weekend. This was met with enthusiasm in general. 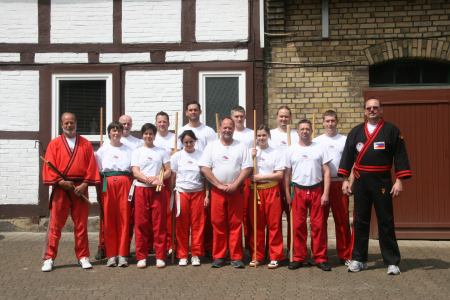