Very expectantly met on Saturday the 20.05.2006 members of the MAMD's from Königslutter, Braunschweig, Wernigerode and Leipzig around in the training course "defense with general objects and ground combat" in Königslutter to participate. The training course was led by the very well prepared trainers Roland Herlt (3rd Dan) and Thomas Schwaner (1st Dan) of the Arnis-/Kombatan department of the TSGK.

The first two training hours under the direction of Roland were dedicated to self-defense with everyday objects worn on the body or in the immediate current environment. In a short introduction Roland showed the essential basics, as well as the special peculiarities and application possibilities of the individual objects. Also the possible targets for counterattacks on body parts and the The use of protective objects was on his program.

The further emphasis of this training unit lay in the practical and simple practice of various techniques. The stick, daga and dulo within the Modern Arnis System are only a means of transfer, with the help of which basic movement patterns can be learned and applied. As with the example of the bottle or newspaper, the familiar is combined with the new. This showed how realistic Modern Arnis is.

In the further course the defense of weaponless and armed attacks was converted with the aid of (among other things) ballpoint pens, belt, jacket and towel. Also new for the participants were the defence and the application with alternative means: Water and sand.

After a short breather, Thomas gave the participants an introduction to various levers and lever entrances. By linking the learnt levers, Thomas Schwaner introduced the topic seamlessly into the area of safety and transport handles. Also possibilities of the transition from the stand to the ground were presented and at the latest the final ground fighting part allowed the trainees to take a shower with a clear conscience. 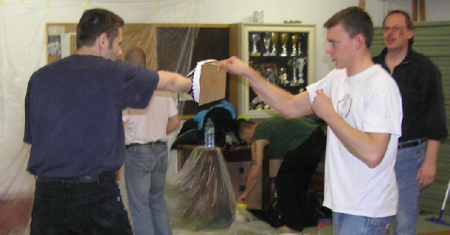