At 1 pm we met on a wonderful day in the Indian summer to the Mano Mano training seminar in Rautheim. All, except our sport comrades from Leipzig. Unfortunately they were caught in a traffic jam 40 km away from the dojo. Despite a delay of only 15 minutes they were able to fully enjoy the course. Their special wish for today: kicking techniques. That meant for Master Roland an extensive warm-up program with many stretching exercises, and that was a good thing!
Before the stretching I (Frank normally grown) just reached my ten toes. Then I was able to cover my entire ball of the foot, unbelievable.
At first we positioned ourselves in a circle and repeated the Mano Mano attack techniques, except for the foot kicks, which were to be trained intensively later.
Then followed different step forms, like alternating step, gliding step, whole step, lunge step, intermediate step and sideways position.
Afterawards we changed to the kicks. First we practiced the forward kick, then the circular kick and the lateral kick. During the last two exercises the training partner was an important "support" in order not to lose balance. The Arnis sticks were also used here, but only as a hurdle and aid for the correct execution of the kicks. The final kick was the kick backwards to the body. Then we were allowed to try out all the kicks on the training dummy, which was really not easy. Good thing for us was that there was no camera that could have recorded it.
Roland showed us how to do it right. Willi, who was supposed to hold the dummy - the emphasis is on "hold on" - was involuntarily pushed back 2 meters due to the impact force. Unfortunately the camera was missing here. :-)
One look to the clock and it was already 3:30 pm. After 2.5 hours of training - time for the first well-deserved break. With coffee and cake (sponsored by our Tessa) we enjoyed the wonderful autumn day.

During the second part of the seminar we intensified the six basic blocks of Mano Mano in partner exercises. First with one step backwards and then with one step 45° forwards. After a short break Roland showed us how to block and just pass the opponent. First without and then with counter. Here our highest concentration was demanded. After a question, what kind of counter you can use, Roland reached into his knowledge box. Awesome!
At the end of the course there were 10 minutes 1vs1 (attack, block, attack, block etc.).
We ended the training day with a meal together. Willi had cooked sausages and potato salad for us.
Conclusion: A successful, interesting and very entertaining course! 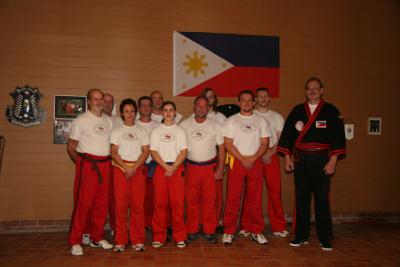