Petrus must be a fan of the Braunschweiger Dojo, because he gave us a sunny day on Sunday April 4th 2011 again. Everybody, well not really everybody, was happy about Roland's decision to train outside on the farm again. Only our Willi stressed to his regret that he had warmed up our Dojo already at 7 am for nothing.
Punctually at 10 o'clock Roland greeted all course participants in the usual way. After a relaxed warm-up program, whirling techniques followed. After that, the first focus of the course - Sinawalis - was seamlessly introduced. This sequence was followed by single, reverse, X, double, double-up, double-double Sinawali, sometimes only with one stick, sometimes with double strokes or stitches and last but not least with changing transitions.
In between we enjoyed a coffee and cake break. This time the cake was sponsored by "little" Frank.
Meanwhile some of the participants had already suffered their first wounds and sweat drops were visible.
Another event was the visit of our grandmaster Wolfgang Schnur. After an exchange of information, the second main topic, double-stick techniques, was now on the agenda. First Roland showed us a 14-double-stick-attack-system. This was practice with changing partners. Then it was the turn of the 10 double-stick techniques with different counter combinations.
In between for strengthening ... finally again ... a drinking break. Gradually the efforts became noticeable among other things at the wrists and upper arms. What came afterwards was very strenuous. Dynamic blocking on the 14-doble-stick-attack-system with final disarmament and counter technique as Sinawali or Redonda.
In the meantime there was an occasional raindrop from the meanwhile cloudy sky. At 2.30 p.m. it was time again for the parade and the course was concluded by Roland with an applause. Last but not least there was a group photo in the Dojo under the Philippine flag. As usual there was a final drink and Petrus had an understanding with us and waited with the rain that started after the round dissolved.
Many thanks to all participants for this great training course, which demanded a lot and caused some aches and pains. A praise also to our participants with a cold, who held out excellent nevertheless. The same goes for our people from Leipzig, who, hopefully, had a good journey home. 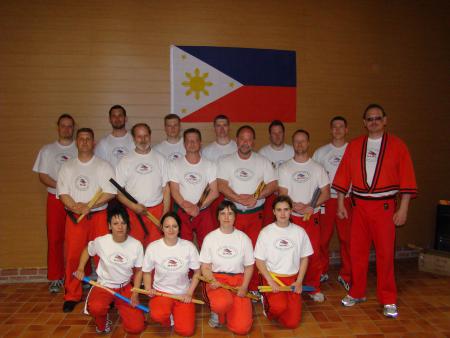