We welcomed guests and friends from Graz (Austria), Leipzig, Penzberg, Kenzingen, Wernigerode, Braunschweig/Rautheim and Königslutter to our autumn camp.
As beautiful as holidays in Lower Saxony can be, they began in the company of more than 40 Arnis enthusiasts.

After everyone had moved into their rooms, the first of six training sessions could begin in the Driebeturnhalle in Königslutter. Special taxi Frank Gorgiel drove daily from Thursday to Sunday to the gym, all participants from Braunschweig enjoyed this service.
In Iaido Harry taught us a Kata with the Boken. Others practiced their examination program (Messer or Arnis). So the time flew by.

​​Whether from near or far, everyone was motivated and then hungry for more
... first of all more dinner.
That's how the evening ended in the common room. Sufficient C2H5OH (medicine) was provided. Nothing stood in the way of making contact and refreshing old acquaintances among the dojos. Everyone was in a good mood and was looking forward to further intensive training days.

After food and drink the first unit started punctually at 10 a.m.. First, the knife was used to go through the testing program. After 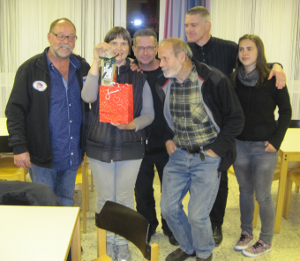 noon, all the eager candidates immediately made their way back to the gymnasium to go through their examination program for the respective class again. Others were more interested in minimizing the lack of sleep in order to be able to start again.

Punctually at 3 p.m. to the official afternoon training all were again eagerly thereby. After the first training session exams in Arnis and DMFV were taken. In the evening the certificates could be handed over to happy faces. Everyone had passed.
Another joy for us was the birthday child Renate, who gave us drinks and sweets that evening. To top it all off, the first "Modern Arnis Boomwhaker Band" was founded under the leadership of Renate and also performed immediately to serenade a little.

Sweets and ethanol have left their mark, but everyone is still enthusiastic about the matter. Two further training sessions followed on this day. In the Arnis, double-stick techniques with disarmament were practiced. Anybody could choose between the offers, learn new things and repeat ones. 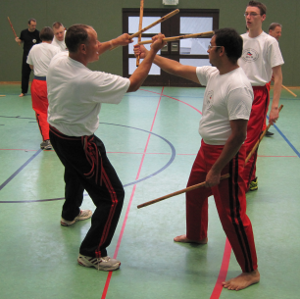 With the knife the first knife form was run. After the midday fiasco of the cook in love,

the second training round was started. And again there was an additional unit from Torsten, this time in Mano Mano defense techniques. In the afternoon our step coordination was in demand. Only by fast forward or glide back could a hit be landed or escaped from this (the use of safeties was useful here). The end of this training session was a cut test. Harry did this for everyone first. Then his student Nadja (1st Dan) was allowed to present her first cut test, with success. The last evening of the camp began: Time for a barbecue. And this time we really deserved the meal. We said goodbye to some guests from Wernigerode and Kenzingen, and hope to meet them again soon in Leipzig at the "Ascension Camp", 28 May to 1 June 2014.

The IV. and last day 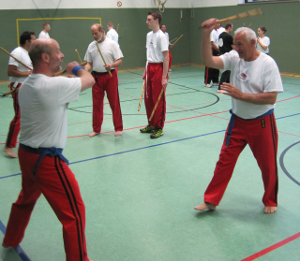 "Let's go to last battle!" Karl-Heinz exclaimed before the final training. This training was used to give the far traveled some knowledge on the way. Among other things, cutting techniques from classical music were practiced in Arnis in largo and corto. The advanced students were involved in freestyle. After four days all reserves were exhausted and the journey home was started with difficult luggage, because new mental inputs had been added and must now be digested and intensively trained.
Many thanks to the active participation which contributed to the success as well as to the organizers and the instructors who made these beautiful days possible.