On 5 March, the time had finally come again: the eagerly awaited first MAMD training course in 2022 took place in Königslutter. In addition to the organising Arnis section of the TSG Königslutter e.V., participants came from friendly dojos in Leipzig, Halberstadt, Weddel and Bahlingen. A total of 19 students and experts came to learn from Grandmaster Roland Herlt and the instructors Ralf Notter, Torsten Zumpf and Wilfried Fischer. The topic of the course was "Examination Programme". After Grandmaster Roland Herlt had welcomed the participants and instructors, it started as usual with a general warm-up before the participants divided into groups according to their respective graduation. Now the students and experts could practice the techniques of their respective examination programmes with each other under the watchful eyes of the Grandmaster and the instructors and intensify their knowledge. But on this day, it did not stop at mere training for all students. After a certain preparation time, Instructor Wilfried Fischer asked the first four students to come to the back of the sports hall, where he subjected the students' techniques to a thorough examination.

After a short break in which the participants could take a deep breath and recharge their batteries with the coffee and biscuits provided (many thanks again to the noble donors!), four more exams were scheduled. It has to be emphasised that three of the four students took their Lakan Isa or Dayang Isa (1st DAN) exams. Accordingly high was the demand that the students imposed on themselves on the one hand and that was expected by the examiner Wilfried Fischer on the other hand. Among other things (but not conclusively), the examinees demonstrated their understanding of the use of machetes, daga, dulo, stick, chain as well as improvised defence objects. During the intensive examination, not only the prospective DAN holders showed what they had learned in the last years, because finally the fourth student to be examined started his examination for the 2nd class (brown belt) and was in no way inferior to the other examinees in intensity and dedication. Whatever energy reserves the students may still have had at their disposal, at the latest during the final demonstration, the tactical fight against two opponents, these were finally used up.

At the end of the course, all students had passed their respective examinations and received their certificates from Instructor Wilfried Fischer in front of the assembled participants. According to tradition, the new DAN holders received a special honour. They were allowed to stand in front of the course participants at the height of Grand Master Roland Herlt and received their new belts from the instructors accompanying them. Afterwards they lined up next to the DAN holders for the very first time before the course was officially closed.

Pictures from the course in our gallery. 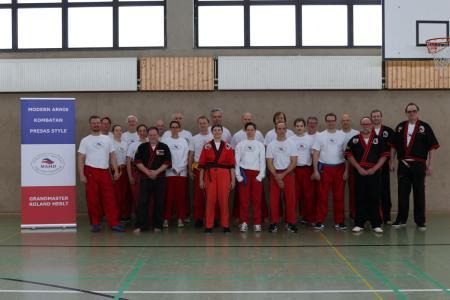