The day started crazy, first a few snowflakes and cold, then sunshine. But the dojo was heated according to old custom and we could start.
In the center of this training course were legwork and step combinations. We started to run along an imaginary "V" along stepping and gliding steps, later we passed the opponent with outstretched fist. After this introductory exercise Senior Master Roland divided the group into beginners and advanced. While the second mentioned refreshed the 15 Mano Mano techniques in the mat room, the beginners practiced the new movement sequences and used the roast to especially practice the edge of the hand strokes.
During the break Jessi brought out a cake, which she sponsored during her first exam, and Wilfried the coffee that everyone enjoyed.
Afterwards we went on to the partner exercises. Some trained the 6 Mano Mano blocks and then pressed down the attack arm to make room for a counterattack. While the others after the block built in the previously practiced gliding step to gain distance and put several counterattacks in the free side.
The next unit was to block an edge of the hand, grab the wrist and move the arm up. The simultaneous grasping and pulling down at the neck led to the fact that the body axis of the opponent was shifted and this was brought only from the equilibrium and finally to the ground, why we came on this training course, the mats somewhat nearer than used. Another aspect of Mano Mano was taken up by the beginners who learned elbow techniques including the block.
The advanced students faced a group task. Two people each stood in the middle of the circle, one in a row made three attack techniques and the defender had to dodge WITHOUT blocking. In order to increase the task even more, one had to assert himself against two. A difficult exercise which promptly put us in a realistic stress situation and yet brought fun, because everyone could use the previously practiced foot techniques and learned something about his own movements and improved them.
Finally, in the last exercise, the 1on1, we were able to reduce the stress and were exhausted and satisfied when the Master of Drill handed over the responsibility to the Master of Grill.
Renate lived up to her name and conjured up ham grills and sausages on the plates with her potato salad. 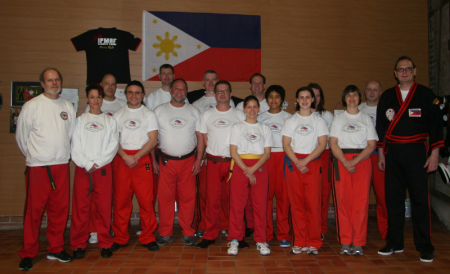 Back to Reports
Year
2015
Author of the text
Tessa Bauer